This post is a follow-up to the session I gave at Devoxx France on MirageOS. It provides detailed instructions on how to setup a development environment to be able to:

Those points are already covered in other documentation material available here and there on the web and I mainly did some synthesis from a newbie perspective. Here is a list of resources that were helpful in making this post:

The goal of this post is to build a simple HTTP service that can authenticate users based on their password. This service’s specification is simple, not to say simplistic and naive:

To build this service we need to:

The server code resides in a unikernel.ml file. I am not at all familiar with OCaml so my code is probably not really idiomatic. Learning OCaml is one of the reasons I became interested in MirageOS in the first place !

The string_of_stream function is adapted from the basic kv_ro example provided in mirage-skeleton. Its name is pretty explicit…

The main module is parameterized by 3 signatures which are provided by MirageOS according to the configuration given at build-time. Here we have 3 modules: The console for outputting some logs, the Key/Value store and conduit which provides network connectivity:

We build a new module by passing underlying connection manager to our HTTP server implementation then we can define our start entry point:

We first define the function that will check the database for matching username/password pair, given an access request. The main thing to note here is that reading from the store happens within the context of so-called light-weight threads or Lwt which is the basic Mirage cooperative thread execution model. Potentially blocking operations expect a continuation that will be passed the result of the operation.

Then comes the meat of the server, the http_callback function that will be called by cohttp upon everyrequest. We extract interesting parts of the request’s URI then check whether or not the username/password pair matches, and finally return a response.

It remains to start the ball rolling by creating the HTTP server and listening on some port, using underlying CONduit module implementation:

The single most important thing to note here is that this code is pretty much system-agnostic: There is no dependency on a particular low-level runtime infrastructure and the same code can be run either as a native binary on Unix or packaged as unikernel on Xen (or QEMU). Implementation details are hidden behind the signatures, e.g. interfaces, that parameterize the Main module and whose instances are passed to the start function.

The second important file one has to write for a MirageOS application is the config.ml file which is used by mirage tool to generate the needed boilerplate to run the actual code.

After the incantation to access Mirage module’s content, we define our first component that will be melded in our application. This one is a simple generic key/value store whose content will be built from the data/ directory. In Unix mode requests for some key will be matched to the content of the data/ directory, whereas in Xen mode we will need to pack that data inside a block device and mount that device in the built kernel

Our second component is the HTTP server. We can see here our configuration depends on the underlying platform. Note that the generic_stackv4 provides IPv4 implementation for both Unix and Xen and strictly speaking we could get rid of the if_impl construct. It is also possible to use a direct_stackv4_with_default_ipv4 implementation on Xen: This will assign a static IP to the kernel which can be changed when configuring mirage.

The handler function defines the general structure of our service and adds some libraries and packages to be imported by mirage. Then we can finally register our auth_service passing it the result of invoking handler with actual implementation of the modules it requires.

We will assume mirage is installed according to the instructions. At the time of this writing, we use:

We can first try to build and run our service on Unix, e.g. locally. We first need to populate a data/ directory with some files representing usernames and add a password inside each file. Then we can configure Mirage, build the executable using the generated Makefile and run it.

In another console, we can test that our authentication service works correctly:

So far, so good! We are now ready to test our unikernel for “real”, e.g. to configure a VM running Xen in VirtualBox…

Configuring a Xen VM on Virtualbox

Note: This has only been tested on the Ubuntu 14.04 box

Fortunately for us, all the grunt work has already been done in the mirage-vagrant-vms which I simply forked and extended to add the following features:

The part I had most difficulties with is of course the networking part. We want the domU virtual machines running on top of Xen hypervisor inside the VirtualBox VM to be visible from our host. The following picture tries to render my understanding of the network topology and configuration we want to achieve (actual IPs/MACs may of course differ). 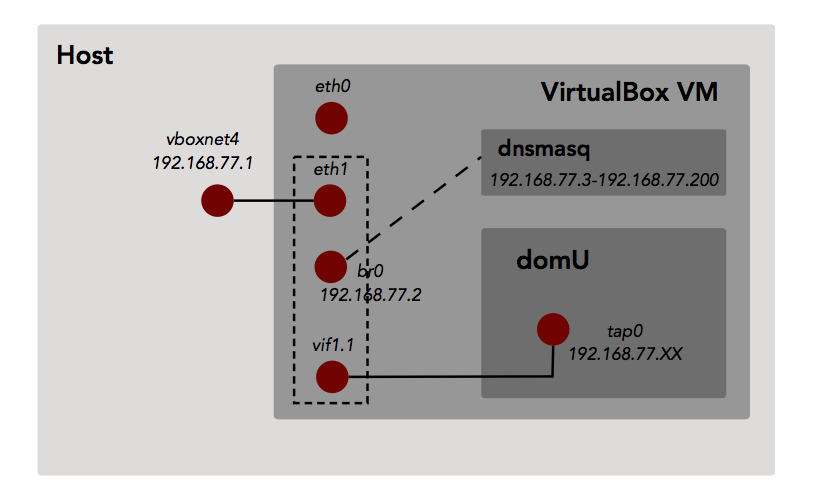 The VirtualBox engine exposes the host-only interface to the host as vboxnet4 with a pre-configured IP (e.g. IP is set in Vagrantfile as part of definition of host-only network). This interface is linked to the eth1 “physical interface” inside the VM and part of the same ethernet network. We create a br0 interface which is a bridge: An interface that connects two or more interfaces by routing the packets to/from each of the bridged interfaces. In this case it connects the host-only interface (eth1) and the the virtual interfaces created for each domU kernel, in this case vif1.1. The latter is pair of a pair of virtual interfaces created by underlying hypervisor when the domU kernel boots up, the other member of the pair being the tap0 interface on the domU side. Each packet going through either interface is made available to the other interface.

Another important is configuring and activating dnsmasq to ensure domU kernels will be able to get an IP address using DHCP. Here we configure it to be attached to br0 interface - our bridge - and to serve IPs from 192.168.77.3 to 192.168.77.200.

Last but not least, one must not forget to enable promiscuous mode on the host-only NIC created for the VM: I spent a couple hours trying to understand why my packets could not reach the unikernel although I could see ARP frames being exchanged…

We are now ready to configure, build and run our unikernel on Xen VM. We assume code has been somehow uploaded to the VM:

This creates a bunch of new files in the project’s directory, the most important one being auth_service.xl:

This is the descriptor that is passed to the Xen launcher to start the unikernel. We must also not forget to build the disk image that will be loaded in our unikernel and exposed to our program as a key/value store:

The -v option asks xl to be verbose and the -c attaches a console to the launched kernel.

This does not work out of the box and I needed to manually edit the generated files to fix a couple of minor issues:

With this modifications one should expect to see something like the following being printed to the console:

And if now query our service from the host, it should reply:

With the corresponding trace on the server side being:

We have been running successfuly our first home-made unikernel on an hypervisor!

I really think the unikernel paradigm could be as important a shift as containers and dockers have been in the last couple of years and as such I really want to keep investigating what MirageOS and HaLVM have to offer. To the best of my understanding there seems to be two different approaches to unikernels:

Obviously, the former approach definitely requires less effort and allows one to produce unikernels in a very short time span by simply repackaging existing applications and services. The latter approach is more demanding as it requires expertise in a specific language and building all the needed components, sometimes from scratch, to provide low-level services otherwise provided by standard system libraries. I don’t have much rational arguments, beyond those provided in Mirage’s own documentation, to back my personal preference for the latter: I might be biased by my interest in functional programming languages, especially strongly typed ones, and the somewhat childish desire to master every single part of the system stack.

What I want to do know is: