In my previous post I focused on the build and development tools. This post will conclude my series on Capital Match by focusing on the last stage of the rocket: How we build and manage our development and production infrastructure. As already emphasized in the previous post, I am not a systems engineer by trade, I simply needed to get up and running something while building our startup. Comments and feedback most welcomed!

Continuous Integration is a cornerstone of Agile Development practices and something I couldn’t live without. CI is a prerequisite for Continuous Deployment or Continuous Delivery: It should ensure each and every change in code of our system is actually working and did not break anything. CI is traditionally implemented using servers like Jenkins or online services like Travis that trigger a build each time code is pushed to a source control repository. But people like David Gageot, among others, have shown us that doing CI without a server was perfectly possible. The key point is that it should not be possible to deploy something which has not been verified and validated by CI.

We settled on using a central git repository and CI server, hosted on a dedicated build machine:

An significant time slice of our build is dedicated to running tests. Unit and server-side integration tests are pretty straightforward as they consist in a single executable built from Haskell source code which is run at IntegrationTest stage of the CI build process. Running UI-side tests is a little bit more involved as it requires an environment with PhantomJS and full ClojureScript stack to run leiningen. But the most interesting tests are the end-to-end ones which run Selenium tests against the full system.

We are using DigitalOcean’s cloud as our infrastructure provided: DO provides a much simpler deployment and billing model than what provides AWS at the expense of some loss of flexibility. They also provide a simple and consistent RESTful API which makes it very easy to automate provisioning and manage VMs.

Configuration of provisioned hosts is managed by propellor, a nice and very actively developed Haskell tool. Configuration in propellor are written as Haskell code using a specialized “declarative” embedded DSL describing properties of the target machine. Propellor’s model is the following:

Propellor manages security, e.g. storing and deploying authentication tokens, passwords, ssh keys…, in a way that seems quite clever to me: It maintains a “store” containing sensitive data inside its git repository, encrypted with the public keys of accredited “users”, alongside a keyring containing those keys. This store can thus be hosted in a public repository, it is decrypted only upon deployment and decryption requires the deployer to provide her key’s password.

Here is an example configuration fragment. Each statement separated by & is a property that propellor will try to validate. In practice this means that some system-level code is run to check if the property is set and if not, to set it.

In practice, we did the following:

Given all the components of the application are containerized the main thing we need to configure on production hosts apart from basic user information and firewall rules is docker itself. Apart from docker, we also configure our nginx frontend: The executable itself is a container but the configuration is more dynamic and is part of the hosts deployment. In retrospect, we could probably make use of pre-canned configurations deployed as data-only containers and set the remaining bits as environment variables.

Doing actual deployment of a new version of the system involves the following steps, all part of propellor configuration: 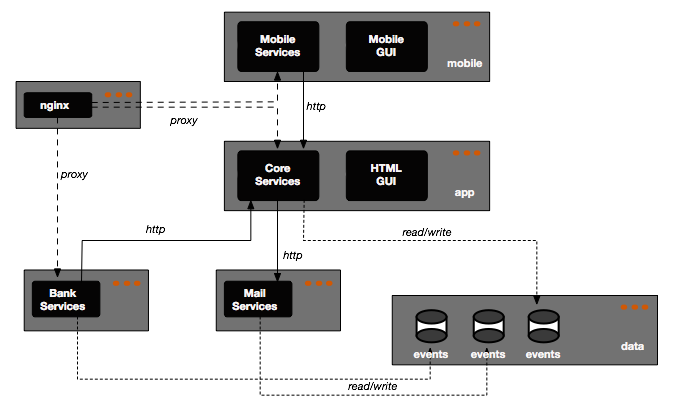 We were lucky enough to be able to start our system with few constraints which means we did not have to go through the complexity of setting up a blue/green or rolling deployment and we can live with deploying everything on a single machine, thus alleviating to use more sophisticated container orchestration tools.

Remember our data is a simple persistent stream of events? This has some interesting consequences in case we need to rollback a deployment:

Monitoring is one the few areas in Capital Match system where we cheated on Haskell: I fell in love with riemann and chose to use it to centralize log collections and monitoring of our system.

We also have set up external web monitoring of both application and web site using Check My Website.

Growing such a system was (and still is) a time-consuming and complex task, especially given our choice of technology which is not exactly mainstream. One might get the feeling we kept reinventing wheels and discovering problems that were already solved: After all, had we chosen to develop our system using PHP, Rails, Node.js or even Java we could have benefited from a huge ecosystem of tools and services to build, deploy and manage it. Here are some benefits I see from this “full-stack” approach:

This completes a series of post I have written over the past few months, describing my experience building Capital Match platform: